What is RAID? What are most common RAID systems?

RAID is an acronym for Redundant Array of Inexpensive Disks and refers to a RAID array. The hard drives can be connected together in certain combinations. Depending on the combination and configuration of the individual disks, different types of the RAID arrays are possible. The number of hard drives is also important .

RAID 0, strictly speaking is not actually a RAID system because there is no reliability or redundancy of hard drives built in. RAID 0 is rather used to double the writing speed of the hard disk. A file does not reside on just one hard drive but is synchronously written onto two or more hard drives. The more disks are used, the higher the write speed will be. In this type of RAID, the risk of a defective hard drive bringing down the entire RAID 0 array is greatly increased. To make the matters worse, recovering data from RAID 0 is extremely difficult and costly.

The most commonly used RAID used in servers and high end system is RAID 5. All popular server use this type of server and redundancy and tolerance is built into the system. The RAID 5 system must at least have three disks. The hard drives must have the same size. When a file is written to a RAID 5 system, the data is split saved on 2 hard disks. The 3rd hard disk receives a checksum of the saved file. In this RAID configuaration, if one drive fails, the system immediately switches to the RAID system recovery and the checksum is calculated over the lost part. RAID 5 systems are often equipped with a hot-swap system. This system allows you to change the hard drives in a live environment. When the fualty hard disk is swapped with a new one, the server calculates the checksum and rebuilds the partition and thus data loss is prevented.If, however, 2 hard disks fail at the same time, we have a broken RAID system which is a huge problem. The recovery of the data gets very complex and the cost of a typical RAID 5 data recovery will run into a couple of thousand £s.

Data Recovery Lab specialises in recovery data from all types of Seagate and Maxtor hard disks as described above. If you have one of these hard disks and it has failed, do not hesitate to call 0207 516 1077 or use the contact form to get in touch with us. 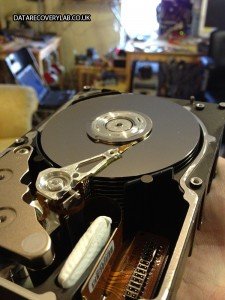 What Our Customers Have Said: